How my curiosity about Cuba inspired my book

Fidel Castro was a frequent guest at my family’s large Formica-topped kitchen table in the 1950s and 60s.

Prompted by the nightly news, my family frequently discussed Castro’s action and the resulting tumult with the United States over Mom’s meat and potatoes. She was a great cook. After dinner, we howled at the weekly antics of Desi Arnez, a Cuban-American actor, and his wife, Lucille Ball, who played a wacky redhead on the television show, “I Love Lucy,” now a classic still in reruns. So, for me, all things Cuban seemed natural, even though I have no other ties to Cuba.

But it wasn’t until the 1990s when my husband, Jack Coffman, repeatedly spoke of his desire to go to Cuba that I ever thought about going there. Unfortunately, he never made it. He died suddenly of a heart attack in 2008, leaving his cherished picture of Che Guevara on his mancave wall and a thick biography of Fidel Castro on the bookshelf.

My chance, however, arrived in late 2013 when a University of Minnesota Alumni Association flyer came through the mail advertising a trip to Cuba in March 2014. I did not hesitate to sign up. But a question soon began to plague me: Would I go as a curious tourist or an inquiring journalist? And, if I took notes, what would I do with them?

While I recognized it was presumptuous to assume I could spend a week in Cuba and write a meaningful book about a country, its people and my experiences, I decided during the trip to give it a go and took notes furiously. My goal was to write a cross between a travel memoir and a primer on Cuba. I figured a slim volume — about a two-hour read – would provide enough for people to get a clear picture. Though not an expert in anything Cuban, I am a practiced observer of people, situations and life from 26 years as a reporter for the Des Moines Register. I have learned to spot salient details and facets, record, analyze and articulate them; and, above all, question, question, question.

During my reporting career, I won various national awards and had my best work, a week-long series called Gay Iowa: The Untold Story, nominated for a Pulitzer Prize.   In short, I have learned to spot salient details and facts, to analyze, articulate and provide enlightening context about them; and, above all, to question, question, question.

Writing this book, for me, also provided the best way to understand what I had seen and put it in context. To do that I researched what our Cuban guide told us. Guess what? I verified everything she said on such credible websites as the CIA Book of Facts and the World Bank.

What surprised me most in seeing Cuba firsthand, conversing with Cubans and doing the research after I returned was my own misshapen beliefs about Cuba and Cubans. This is why traveling is so broadening, isn’t it? I hope readers of “From Mango Cuba to Prickly Pear America,” delve into discovering what they didn’t know and will be the impetus to go to Cuba to see for yourself. 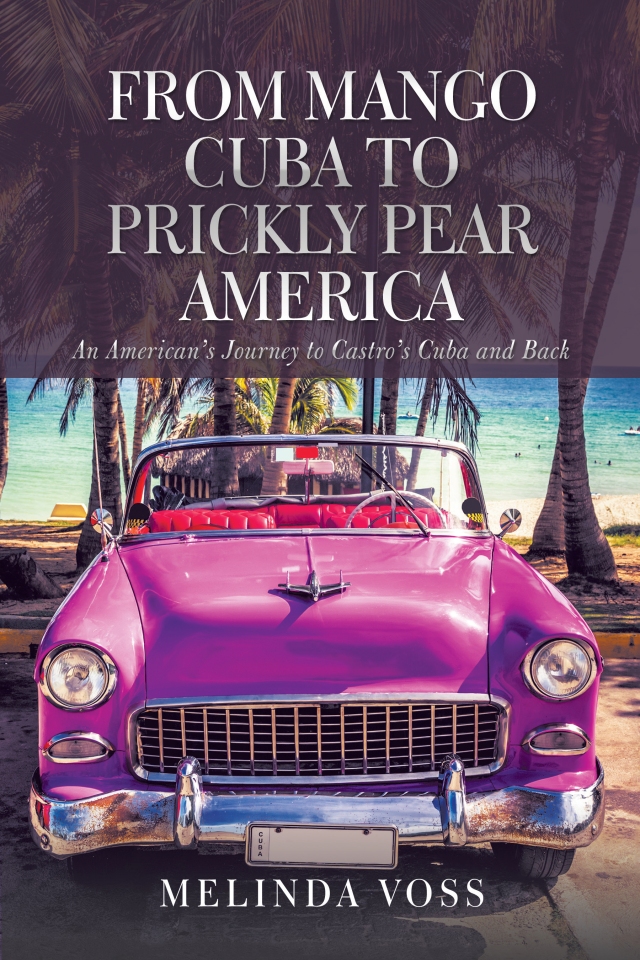 Melinda Voss, MPH, APR, is a freelance writer, editor and public relations specialist. A staff writer for The Des Moines Register and Tribune for nearly 26 years, she has won regional and national awards and taught undergraduate and graduate journalism courses at three universities. In 1999, she earned a master's degree in public health from the University of Minnesota after co-founding the Association of Health Care Journalists in 1997. Voss initially served as the association's unpaid coordinator, then became the executive director from 1999 to 2004. She then became the public relations director for the Minnesota State Colleges and Universities system and served in that position until November 2012. She earned her APR, an accreditation in public relations, in 2011.
View all posts by msvoss →
This entry was posted in Blog and tagged author, book, Cuba, From Mango Cuba to Prickly Pear American, journalist, Mango, memoir, Pear, travel, United States, writing. Bookmark the permalink.